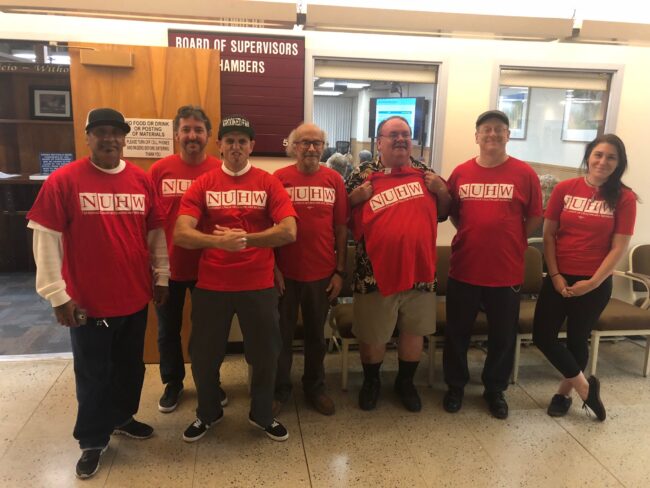 Santa Cruz has an opioid overdose death rate double the statewide average. Yet, Janus of Santa Cruz, the county’s primary addiction treatment provider, pays its employees so little that experienced counselors are leaving the region for better-paying jobs. Turnover at Janus neared 40 percent in 2016, leaving the nonprofit, which received $4.8 million in county funds, struggling to care for the approximately 2,500 clients it serves every year.

“Continuity of care is crucial in this field. Relationships are key to our success,” said Matthew Van Nuys, a drug counselor. “And turnover is the absolute enemy of recovery and the work that we do. And turnover is at an all-time high, and I’m convinced it’s because of wages.”

Van Nuys, who is expecting his first child, said he’ll have to find another job if Janus doesn’t boost salaries. “I don’t want to quit, but I will if I can’t make enough money to raise a family.”

Jo Koumouitzes, a former Janus counselor with a child to support, said the nonprofit was paying most treatment workers around $12 per hour, but gave her $13 because she had a master’s degree. She could have made more at Panda Express or In-N-Out, and she ended up taking another counseling job that pays double what she was making at Janus

“I do miss working with my clientele,” she told supervisors. “That was just the choice I had to make.”

While Janus has made facility improvements, it has done little to boost worker salaries, Jason Lubin, a certified drug and alcohol counselor, told supervisors. Lubin, who has worked at Janus since 1999, makes $17.23 per hour and lives in a trailer. “It’s just a real difficult time making ends meet,” he said. “There doesn’t seem to be money going into (Janus’) human infrastructure.”

Worker testimony was covered in the Santa Cruz Sentinel.

Janus workers, who joined NUHW last year, are seeking to lift everyone’s pay to at least $16.21, which Santa Cruz County has set as the living wage for employers that contract with the county. They are seeking 6 percent raises for workers who make at or above the living wage.

As a nonprofit, Janus is exempt from Santa Cruz County’s Living Wage Ordinance, and about 75 percent of its treatment technicians and administrative workers are paid less than $16.21 per hour. Even experienced counselors average less than $20 per hour in a county where monthly rent for a two-bedroom apartment now exceeds $2,000.