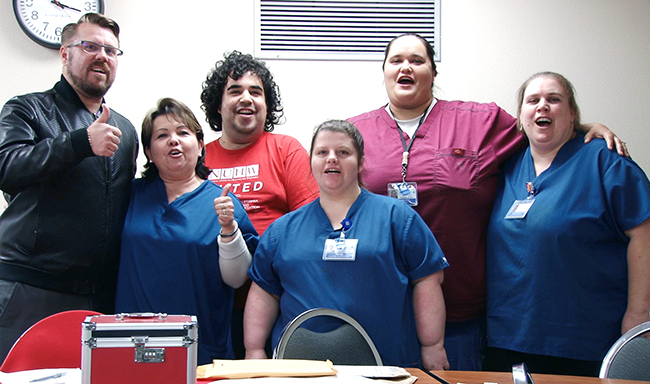 Members voted by 98% percent to ratify the contract at balloting held April 11 and 12 at both hospitals.

By the end of the second year, no NUHW member at either hospital will make less than $15 an hour. Currently, St. Joseph pays 235 Humboldt workers — fifty-five percent of the NUHW-represented workforce — less than $15 an hour, with some making as little as $10.90. Many workers at the two hospitals have been earning wages so low that they qualify for food stamps and Medi-Cal, meaning taxpayers have been forced to subsidize St. Joseph’s low wages.

“It’s a stunning victory,” said NUHW President Sal Rosselli, “and a clear admission on the part of St. Joseph that they have been grossly underpaying their workers for years. And not only in Humboldt County — St. Joseph workers in Sonoma and Napa counties are earning wages far below market rate, wages that make it exceedingly difficult to support a family.”

NUHW members also won a voice in the hospital’s staffing and safety policies. One elected worker will serve on the hospital’s Safety Committee, and the agreement also establishes a joint labor–management committee to address staffing and patient care problems with the right to take disputes to mediation.

“This is a huge win for patients,” said Kellie Shaner, a monitor technician at St. Joseph Eureka and a member of the bargaining committee that started negotiating with St. Joseph in November 2014. “We’ve been sounding the alarm about short staffing for years. Finally we’ll have a seat at the table to advocate for safe staffing levels and improved patient care.”

The Humboldt County caregivers waged a multifaceted campaign to educate and reach out to the community and to pressure St. Joseph to do right by its workers and patients. In May 2015, NUHW released a report, Uncompensated Care, that was initiated and informed by the workers and their experiences at the two hospitals. They initiated an “End Poverty Wages at St. Joseph” campaign, distributing lawn signs to supporters throughout the community, and took their case to local media like the Eureka Times–Standard, Lost Coast Outpost, and KHSU radio, which aired an hour-long discussion on July 2, 2015, with members Kellie Shaner and Allen McCloskey.

Members also participated in several videos that gained a sizable audience throughout the county on Facebook, YouTube, and on public-access television. A 30-minute video of interviews with Kari Hegelston, Austin Allison, and CNA RN Kerry Sweeney aired on local television, and a shorter version was shared widely on Facebook and YouTube.

Ultimately it was the unity of the workers and their threat of a strike that forced St. Joseph to settle a fair contract.

“We fought long and hard for this victory,” said Daniel Aukerman, a materials management worker at St. Joseph Eureka and a bargaining team member. “We took a principled stand and held St. Joseph accountable to the community, who have been getting shortchanged on the care they receive while also having to subsidize the poverty wages St. Joseph has been paying. Some full-time workers have had less than a $1 increase after five years on the job and still make just $11 an hour. Most of us are working extra shifts and double shifts because of St. Joseph’s understaffing.”

The agreement also guarantees no reduction in healthcare benefits for the life of the contract after July 1, a guarantee not enjoyed by the hospitals’ non-union workers. Workers also staved off St. Joseph’s threatened cuts to compensation for workers who take on extra shifts and made other important gains, including seniority and worker protections over discipline, scheduling, the rights of union members and stewards, and recognition of seniority.