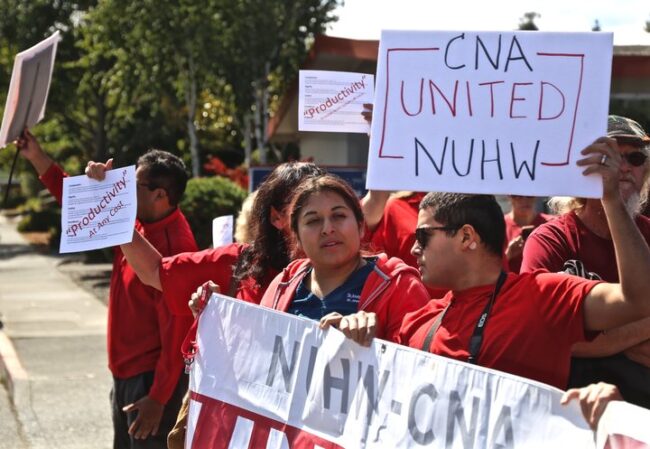 Providence St. Joseph workers continued to shine a light on the hospital chain’s profit-driven mentality that has put patients at risk.

However, just two days later, Providence announced the layoff of 25 caregivers at the Humboldt County hospitals.

Jessica Corral, an emergency room technician, found out she was one of the workers losing their jobs when her manager called her into a meeting with a human resources representative.

“I tried to fight back the lump in my throat as I turned to my manager and asked, ‘Am I being fired?’ she told the Eureka Times Standard. “Her eyes began to swell with tears and she nodded ‘yes.’”

The two Providence St. Joseph hospitals have reported making a combined $172 million in operating profits between 2014 and 2017. Yet, the company has refused to adequately staff key departments with enough nurses, nursing assistants and medical technicians.

The situation is similar at Providence’s Santa Rosa Memorial Hospital, which reported making $55 million last year. In July, the hospital laid off more than two dozen caregivers including the last Constant Care Attendant, whose job was to sit with patients who could be threats to themselves.

On Sept. 9, the hospital left a nursing assistant alone with a psychiatric patient, who shoved her against a wall and then jumped out a second-story window. Caregivers have reported that the hospital had ignored requests to properly train them to handle psychiatric patients and failed to devote the resources needed to keep them and their patients safe.

In Humboldt County, the recent layoff included all of the Constant Care Attendants at both St. Joseph Eureka and Redwood Memorial Hospital.

Workers at both hospitals represented by NUHW and the California Nurses Association organized the initial rally after a management failed to provide coverage for a technician who eventually peed in her pants while refusing to leave her patient’s bedside.

Prior to that incident, caregivers had detailed the staffing shortfalls and formally requested more than a dozen additional direct patient care providers be staffed in several departments including Radiology, Emergency, Ultrasound, Intensive Care and Surgery. They had also requested that nursing assistants care for no more than eight patients at any given time.

Following the layoff, caregivers addressed the Eureka City Council about the impact of the layoffs and chronic understaffing, the Times-Standard reported.

“I’m here to tell you, from the front lines, we absolutely, unequivocally, have a staffing crisis,” Randee Litten, a charge nurse at the emergency department told council members.

Litten described a situation on Sept. 16 where she had “two traumas running simultaneously,” while two patients were on gurneys in her hallway because it wasn’t safe for them to be in the waiting room. The emergency department was three nurses short, and instead of having four emergency department techs on staff, she had one.

“The average time on Sunday from decision to admit to moving the patient upstairs was seven hours,” Litten told council members. “Tell me how cutting key staff is going to improve this number?”

NUHW and CNA are held a joint informational picket Sept. 25 in front of St. Joseph Eureka to demand that the hospital rescind the layoffs and adequately staff both hospitals.