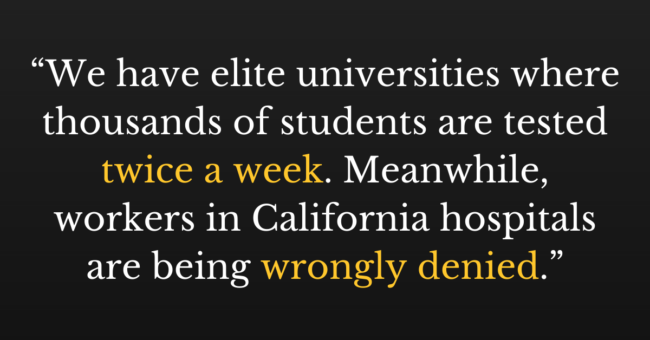 Staffing shortages, lack of PPE, and failure to offer COVID-19 tests are major challenges for workers in hospitals across the state

California is the first state where the number of COVID-19 cases has surpassed 2 million before the expected surge from Christmas and New Year’s gatherings. In Los Angeles County alone, the coronavirus death toll is expected to exceed 10,000 this week. Dr. Anthony Fauci recently warned that the coronavirus pandemic is likely to get even worse in January.

Despite the demand for hard-to-replace, skilled, healthcare workers, California’s hospitals and healthcare providers aren’t doing enough to protect those on the front lines from exposure, says the National Union of Healthcare Workers.

Virus researchers have been predicting since last spring that a second wave of cases would hit in winter. “California’s hospital administrators knew a surge was coming but they did not adequately stockpile personal protective equipment, and they have been resistant to regular testing for workers coming in contact with patients who are battling coronavirus,” said NUHW President Sal Rosselli.

NUHW has been pushing hospitals to boost standards, provide more PPE and regularly test workers. The union has even held protests outside some facilities such as Tenet Healthcare’s Fountain Valley Regional Hospital in Orange County.

The union also has been sounding the alarm for more protection for healthcare workers in other settings, such as prisons. Nurses and clinic workers staffing jails employed by a private contractor in Stanislaus and Sonoma counties voted overwhelmingly for NUHW representation earlier this year. The key issue was safety and health concerns related to COVID-19 exposure.

Prior to the pandemic inadequate staffing was the norm in most of the state’s hospitals. NUHW and other unions found it necessary to regularly challenge employers about safe staffing ratios. According to Rosselli, “the healthcare industry, despite sitting on billions of dollars in reserves, has an absurd, bottom-line, ‘just-in-time’ approach of limiting staffing and supplies. This has made conditions worse during the pandemic with the crush of COVID-19 patients. Unsafe staffing is now reaching dangerous extremes and putting healthcare workers and patients in California and all across the nation at risk.”

This week, Kaiser Health News and The Guardian reported that nationally more than 2,900 healthcare workers have died in 2020 after contracting COVID-19, a number much higher than previously believed. The vast majority of these losses were workers under age 60, and people of color accounted for 65 percent of the reported deaths (where race and ethnicity data was available). Many of these deaths were avoidable. KHN and The Guardian found that one-third of the fatalities were related to inadequate personal protective equipment.

“We have had too many instances where healthcare workers have been forced to provide their own PPE or reuse masks due to short supplies,” Rosselli said. “Workers are being denied tests when they fear exposure.”

“It’s just not right,” he said. “We have elite universities in this country, such as Cornell, where thousands of students are tested twice a week. Every day, in various sports, professional athletes are tested daily for coronavirus. Meanwhile, workers in many California hospitals are wrongly being denied.”

Just prior to Thanksgiving, California state authorities launched the nation’s most rigorous COVID-19 testing regimen in an attempt to mitigate the spread of coronavirus among hospital workers. Yet several employers have not committed to following the new rules, seeing them as “guidance” rather than as a “mandate.” This despite overwhelming evidence showing that a similar testing requirement instituted in May for California nursing homes helped reduce COVID-19 transmission. NUHW had pushed hard for the new testing regimen for hospital workers.

The National Union of Healthcare Workers is a member-led movement representing more than 15,000 healthcare workers in California.