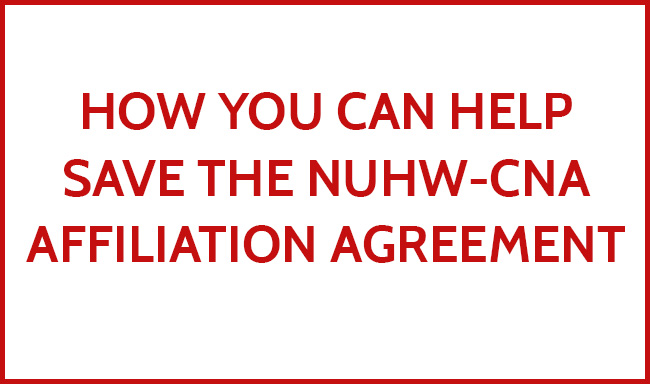 Help save the NUHW-CNA affiliation

Top officials at the California Nurses Association are trying to dissolve the affiliation agreement that NUHW members overwhelmingly voted for in January 2013.

Ninety-six percent of us voted to affiliate with CNA in an agreement that would maintain independence for each union but allow us to provide mutual support to one another to advance our members’ interests.

The NUHW–CNA affiliation agreement says: “We share a unified vision that a strategic alliance of all who work side-by-side in hospitals and other health-care settings best furthers the critical need of protecting and improving patient care and workplace and employment standards that are under relentless assault from corporate healthcare employers, and achieving the highest standards of care for our nation.”

“We’re proud to stand up with NUHW to make sure we have their back and as long as they’re fighting for their workers, we’ll be fighting alongside of them,” said CNA Co-President Debra Burger at the January 2013 press conference where NUHW and CNA announced our affiliation agreement.

The affiliation can only be dissolved by mutual agreement of both unions.

But about ten months ago, CNA staff leaders made an ultimatum to NUHW: that NUHW either end the affiliation or agree to be taken over by CHEU, a small union within CNA. CNA National Staff Director Mike Griffing told NUHW officers and attorneys that “CNA is not going to have an affiliation with a union that we can’t control.”

Both options are blatant violations of the affiliation agreement, and neither is acceptable to NUHW’s Executive Board. Instead, NUHW’s elected board has proposed that the two unions work together to fully implement the agreement in pursuit of our members’ shared interests. CNA’s leaders have refused and are using a legal procedure to try to end the affiliation agreement. In January 2016, an outside arbitrator is scheduled to hear CNA’s request.

What can you do?
Many RNs support the joint work between NUHW and CNA, and are unaware that CNA’s staff leaders are trying to end the affiliation agreement. Many RNs would like to improve coordination and solidarity between our two unions. In fact, NUHW members and CNA nurses are currently working together on campaigns in the St. Joseph hospitals, Sutter CPMC, and Keck USC.