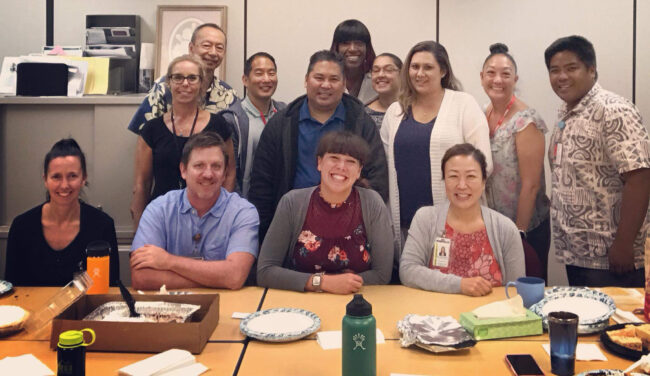 Andrea Kumura knew there was a union that could help her and her fellow Kaiser mental health clinicians in Hawaii.

While working in California more than a decade ago, she befriended several colleagues who landed jobs at Kaiser and joined NUHW.

Back in Hawaii, she and new co-workers had talked about doing the same to combat under-staffing, low pay and long waits for patients to schedule appointments.

They finally took the plunge this year after Kaiser unilaterally eliminated their five days allotted for educational leave.

“I had thought about contacting the union for many years,” she said. “I finally decided that ‘OK, we need to do something about this.’”

Because clinicians and drug dependency counselors have to keep their credentials current, the elimination of educational leave was tantamount to losing five vacation days. Moreover, Kaiser stopped letting workers pair educational leave with vacation time, which prevented them from flying to the mainland to attend major conferences.

Kumura contacted NUHW, and said joining up was “an easy sell.” Spread over several islands, the Kaiser workers texted and held nighttime conference calls with organizers in California who stayed up late to explain what they’d have to do to join.

The biggest selling point was reviewing the contracts NUHW members won at Kaiser three years ago.

“For everyone, those contracts they had in Northern and Southern California were like pipe dreams,” Kumura said. “We would love to have a contract like that.”

Not only did the contract guarantee that NUHW’s California members got better wages and educational leave, but it also set thresholds under which Kaiser had to hire more clinicians to lighten patient loads.

Kumura said that Kaiser had ignored her colleagues request for more staff to cut down on the wait for appointments and keep clinicians from burning out and leaving for other jobs.

“We were told that we had to be more productive,” she said.

Kumura and her colleagues voted 30-to-1 to join NUHW in an election that was tallied in early September.

I really hope that we get a successful contract that really takes into account the views of our staff and even more so the needs of our patients,” Kumura said. “We’ve got a great team. We’ve got great people. And we want to keep all of them.”