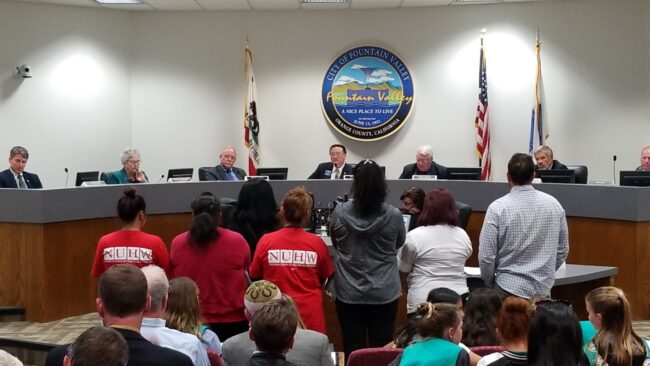 After Mayor Michael Vo declined to meet with our Sodexo members, they attended the Tax Day council meeting to raise the issue of Sodexo keeping millions of dollars from the Trump corporate tax cut but refusing to improve pay for workers who have to collect cans to make ends meet. The same holds true for the hospital’s corporate parent, Tenet Healthcare.

After NUHW Organizer Luis Vega addressed the council, Mayor Vo, who has served on the hospital’s community advisory board, refused to let workers address the council until an end-of-meeting public comment session reserved for matters not on the council agenda. Vo, who was visibly angry, also insisted he would not intervene in helping workers get a fair shake from Sodexo or Tenet.

At the end of the meeting, we submitted our information packets to the council and went into detail about how Tenet is letting Sodexo pay poverty wages to Fountain Valley workers.

Then, Rabbi Steve Einstein from Clergy and Laity United for Economic Justice addressed the council. The rabbi, who previously served with Mayor Vo on the hospital board, said that if he was still on the board, he would meet with workers and listen to their concerns. That elicited cheers from community members attending the meeting.