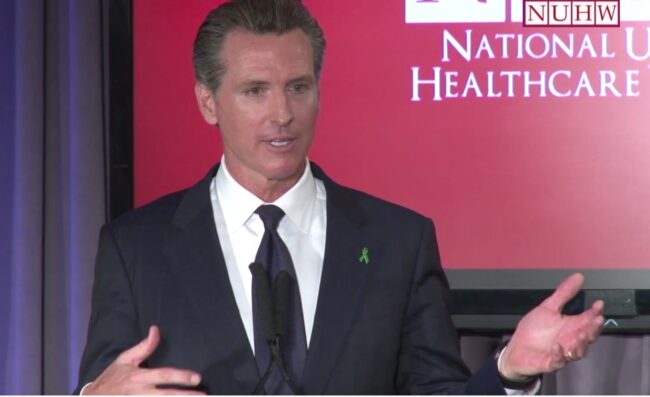 In what can be described as a “primary before the primary,” 350 stewards, local leaders of the National Union of Healthcare Workers, voted Sunday to endorse and direct the politically active union’s energies and resources to back the campaign of Lt. Gov. Gavin Newsom in the 2018 California governor’s race.

The NUHW leaders voted by secret ballot after listening to the four leading Democratic contenders outline their positions on healthcare, immigration, workers’ rights and affordable housing at a forum held at the Park Sheraton Hotel in Anaheim. This was the first time that the Democratic candidates, Lt. Gov. Gavin Newsom, former Los Angeles Mayor Antonio Villaraigosa, State Treasurer John Chiang and former State Superintendent of Public Instruction Delaine Eastin, have appeared together in-person in a debate or forum setting.

The entire forum can be seen below. Click here for the Spanish version.

“We are very appreciative to the Democratic candidates who took the time to meet our members this weekend and discuss the issues that are of concern to them and all Californians,” said NUHW President Sal Rosselli. “It was a great debate that focused on key issues and was devoid of personal attacks. Afterward, we honored our democratic principles with a transparent endorsement vote.  There was no backroom dealing; no smoke and mirrors. Our members studied the candidates’ positions and got to hear them as they faced-off on our stage. After a runoff, Gavin Newsom won our support.”

No candidate received an outright majority in the first round of balloting.  The top two vote getters, Newsom and Delaine Eastin, squared off in a run-off ballot. Newsom won the run-off with 53 percent of the vote.

Newsom added that California could afford a single-payer system in large measure by reallocating funds already spent on healthcare. “The fact is the money exists in the system,” he said. “The money is not being well invested. A single-payer system provides the ability to provide more efficiencies and cost controls.”