Sick of being forced to work with cleaning chemicals that make them ill, housekeepers at St. Joseph Eureka and Redwood Memorial hospitals took to the streets Monday to demand their hospitals switch cleaning solutions.

The June 18 protest outside St. Joseph Eureka was covered by NBC3 and the Lost Coast Outpost.

For the last two years housekeepers at both hospitals have been required to use OxyCide, a relatively new one-step cleaner, disinfectant, and deodorizer product, which they say has caused them respiratory problems, burning noses, burning eyes, rashes and severe headaches.

“Every time I use this cleaner, I get headaches and feel a burning sensation in my eyes, nose and throat,” said Andrea Bernardi, a housekeeper at St. Joseph Eureka. “We’re suffering every day, and the hospital is refusing to do anything about it.”

The author of the NIOSH study recommended that hospitals take measures to reduce employee exposure to OxyCide if they report respiratory, skin or eye problems. The University of Vermont Medical Center stopped using OxyCide after nurses complained, and the hospital was cited by Vermont OHSA for failing to properly assess the hazards posed by the product.

Yet, despite months of formal complaints from workers, St. Joseph, which also operates Redwood Memorial Hospital, is still refusing to address their concerns. St. Joseph’s intransigence led the housekeepers to demand that the matter go to arbitration.

“We must be treated as human beings,” said Candelaria Ramos, a St. Joseph housekeeper and NUHW shop steward.  “Now we get sick because we work at St. Joseph Hospital.  All we want is for the hospital to change its cleaning fluid to one that doesn’t hurt us.”

OxyCide is produced by the firm Ecolab. It hit the market in 2013, billed as an effective agent for killing bacteria on hospital surfaces.

The housekeepers were  joined Monday by supportive colleagues including nurses, local labor unions, and community members.

“It’s unacceptable that our housekeepers are being made to use chemicals that make them sick,” said Lesley Ester, a registered nurse at St. Joseph Eureka. “St. Joseph needs to take their concerns seriously and consider alternative cleaning products that won’t harm hospital workers.” 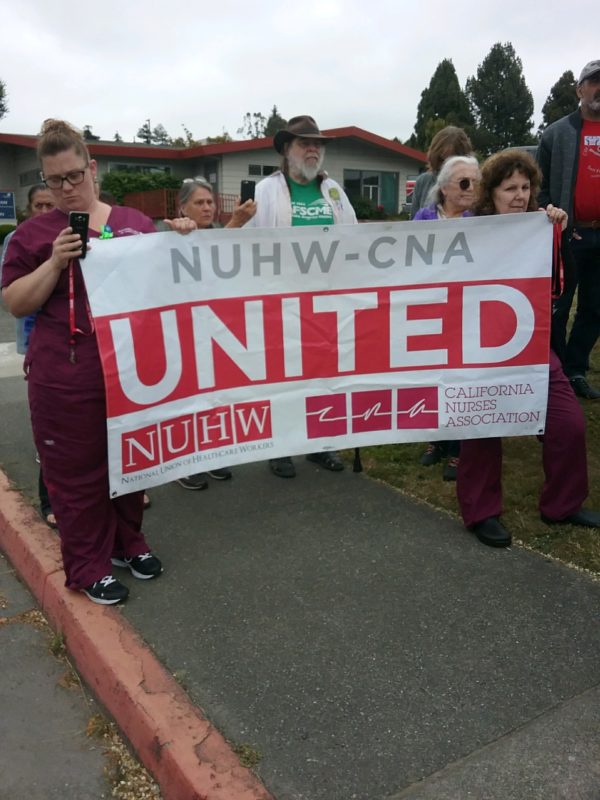