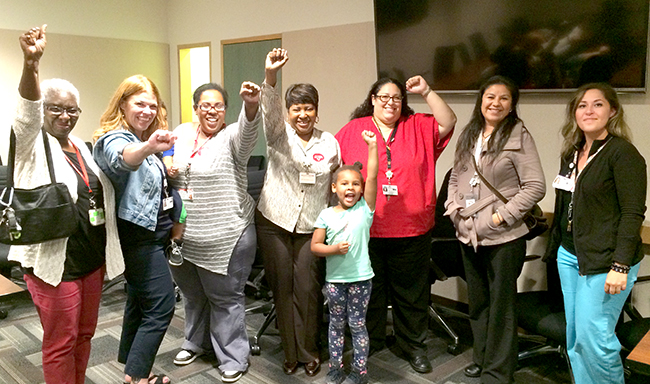 More than one thousand previously unrepresented workers voted to join NUHW in the last several months.

With this victory, and a previous election victory in February, the hospital is now wall-to-wall NUHW.

“Because we’re short staffed, I take on extra responsibilities, including that of a nursing assistant,” said Unit Secretary/Monitor Tech Ruth Sevilla. “We have old equipment and are continuously overworked. We formed a union so we can fight for the equipment, support, and staff we need to give our patients the care they deserve, and to help boost morale at our hospital.”

In addition to short staffing, Fountain Valley caregivers experience stagnant wages, inequities in pay as new hires are frequently paid more than longtime staff, and exploitation of per diem workers, many of whom work full-time schedules but receive no benefits and have seen no wage increases for years.

“Our wages have not kept pace with the cost of living,” said Engineer Dave Seboldt. “And many of us who have been here for years and get great performance evaluations not only train new employees, including our own supervisors, but make much less than those who just got hired. Workers should get paid for their years of service.”

On August 3, three hundred office and administrative workers at Children’s voted 87 percent to join NUHW. This election, combined with a June election in which more than seventy Children’s technical workers voted to organize, nearly doubles the number of NUHW members at the hospital. The NUHW Children’s bargaining unit is now nine hundred strong.

“I want to work together with my co-workers for a better Children’s Hospital. I believe that we can do that by forming a union with NUHW. Almost every other position at CHO is represented by a union. Why not us? I think it is time for us all to join together,” said Office Associate Katie Jones. “Together our voices will be heard. Together we will bargain a contract that keeps our jobs secure and keeps us invested in CHO and our service to our community.”

The new members are gearing up to join their coworkers in bargaining to fight for improvements in wages, benefits, and working conditions at Children’s.