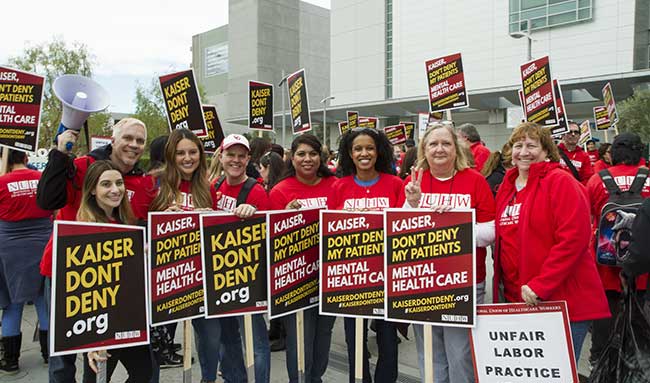 Kaiser Permanente has a shameful history of denying its patients timely access to mental health care. Because clinics are chronically understaffed, patients have to wait a month or more for therapy appointments. As a result, many patients pay out-of-pocket for the care they need, or give up on getting help altogether. Those who persist are often pushed into group therapy instead of getting the individual attention they need, or referred out to non-Kaiser therapists, who can’t access patient charts and have few available appointment openings.

For nearly a decade, NUHW has stood up to Kaiser so patients can get the care they need and deserve. When Kaiser digs in its heels, we refuse to back down.

The DMHC releases the results of its 16-month investigation, citing Kaiser for multiple “serious” and “systemic” violations of California’s Mental Health Parity Act and other laws that resulted in thousands of patients with serious mental health conditions waiting weeks or even months for treatment appointments.

The DMHC fines Kaiser $4 million — the second largest fine in the agency’s history. It also orders Kaiser to “cease and desist” from limiting access to mental health care in violation of state law.

After initially appealing the $4 million fine, Kaiser announces — one day after a pre-trial hearing — that it will pay.

The DMHC releases results from a full survey of the Kaiser Health Plan, finding that Kaiser still has not fully resolved patient access issues for its mental health services.

The DMHC and Kaiser announce a settlement agreement in which Kaiser agrees to a three-year program of outside monitoring of its mental health services by a state-approved firm with the authority to impose up to $1 million in additional fines against Kaiser if it fails to remedy access issues.

After months of negotiations, during which Kaiser refused to even consider our proposals aimed at shortening patient wait times and increasing the ratio of clinicians, our labor contract expires.

The ball is now in Kaiser’s court. If they decide to treat patients and caregivers with fairness and respect, we’re ready to roll up our sleeves and find sensible solutions to the chronic problems that deny patients timely and appropriate care. If not, we’re ready to continue our fight for as long as it takes until they understand they can’t get away with shortchanging mental health care anymore.