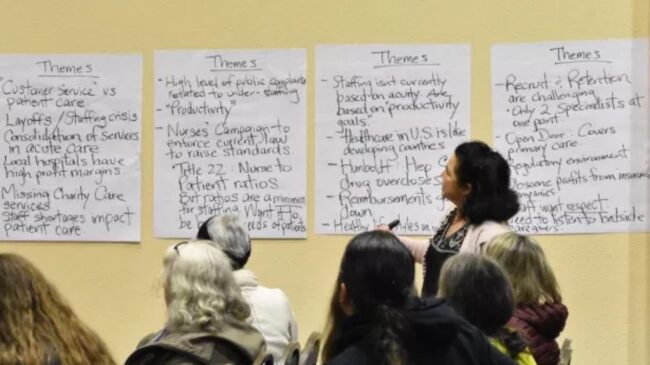 Over the past year, Providence St Joseph Health’s Redwood Memorial Hospital and St. Joseph Hospital Eureka have reported a combined $58 million annual profit, while laying off more than two-dozen caregivers.

With Providence controlling a near health care monopoly in Humboldt County, our members, along with the California Nurses Association, held a Feb. 25 Town Hall focusing on the state of health care in one of the state’s most remote counties.

Providence executives refused to participate in the Town Hall, but that didn’t stop 130 local residents from attending. The event was covered by the Eureka Times Standard and KRCR-7.

Several speakers reported that care had suffered after the hospital laid off all its bedside caregivers known as “sitters” who are trained to sit with patients who could be a threat to themselves or struggle to walk independently.

“We had a staff meeting (after the layoffs) and our managers wanted to discuss that we’d had a sudden increase in (patient) falls on the floor, and ‘How can we work to stop this?’” said Sallie McComas, a hospital staffer. “Our sitters prevent falls.”

Another speaker, Sylvia DeRooy, shared her account of a disastrous hospital say, in which she said she there was no one to help her bathe.

Caregivers at the hospitals have pushed for more staffing, but management has ignored  their demands and refused to share information disclosing how it sets staffing ratios and why it has been cutting staffing and reducing services while reaping windfall profits.

“It’s unfortunate that somebody who has so much power in our community refuses to place any value on the voices of bedside caregivers,” James Ladika, a nurse, told KRCR.

“Caregivers have been sounding the alarm about the understaffing crisis in our hospitals,” said Meredyth Dielmann, a laboratory technician at Redwood Memorial Hospital. “This forum is the first step for our community to hold Providence St. Joseph accountable and make sure Humboldt County residents get the quality care they deserve.”