The facility’s owner, Brius Healthcare Services, “has been slapped with a flurry of citations and penalties by government regulators,” as the Marin Independent Journal wrote in its coverage of the strike.

From the Independent Journal story:

“The patients suffer because we’re understaffed,” said Certified Nursing Assistant Maria Martinez, who has worked at the facility for 24 years. She said staff turnover is high due to low wages.

Olga Espinoza, a nursing assistant who has worked at the nursing home for five years, said, “We’re short-staffed all the time. One nursing assistant ends up taking care of 13 patients at a time. It’s very hard for us to give the proper care. It’s not fair to the patients.”

Nursing assistant Armie Batayola said, “Between 11 p.m. and 7 a.m., there is sometimes just one employee caring for 46 patients.”

Martinez said patients’ nutritional needs are not being met and some residents are developing chronic bedsores due to neglect.

“The meals are terrible,” Martinez said. “Can you believe to make a lasagna they only allow the cooks to use five pounds of meat for some 40 residents?”

Turnover at the facility doubled to 50 percent in 2014 after it was purchased in 2012 by Brius Healthcare Services, California’s largest nursing home chain with 81 nursing homes.

Medicare has given the San Rafael facility its lowest overall rating, one out of five stars. Likewise, CalQualityCare.org, which also evaluates California nursing homes, rates San Rafael Healthcare and Wellness Center as “poor,” its lowest of five rankings.

Since Brius acquired the San Rafael facility, it has amassed 85 California Department of Public Health deficiencies. During the eight years before Brius bought the home, it had 162 deficiencies.

Brius was the subject of a damning exposé by the Sacramento Bee’s investigative reporting team in which Molly Davies, administrator of Los Angeles’ long-term care ombudsman program, which investigates nursing home complaints, said her staff had uncovered a “flagrant disregard for human life” in some Brius-owned facilities.

Again, from the Marin IJ:

The Bee interviewed Brius’ owner, Shlomo Rechnitz, for its report. Rechnitz asserted that his company became a government target following a legal dispute with the state over delinquent paperwork.

“All of a sudden, we show up to court one day and there is an emergency motion that refers to us as a quote-unquote serial violator of laws,” Rechnitz told the paper.

Rechnitz explained that his business model is to acquire failing nursing homes and turn them around. He said of the 81 facilities he owns 59 were “distressed” when he bought them. The Bee reported that the nursing homes that Rechnitz owned in 2013 made a profit of $62 million — five times what the same homes earned in 2006.

In November, a 57-year-old resident at a Brius facility in South Pasadena, who was known to be delusional and suicidal, signed out of the nursing home, bought a plastic jug and a gallon of gas and set herself on fire. She died less than 24 hours later in a Los Angeles hospital with second- and third-degree burns over 90 percent of her body.

Working conditions have been declining at San Rafael Healthcare and Wellness Center for years. Caregivers have seen sharp cuts to their healthcare coverage and their wages have stagnated for four years while Brius’ profits are through the roof — more than $600 million a year. The company’s profit margin is three times the state average for nursing homes.

“In four years we haven’t had a raise, not a nickel,” said Maria Martinez. “Every time that we have open enrollment the cost of our medical insurance goes up 100 percent. I live in Richmond. I can’t afford to live in Marin on the salary I make,” said Martinez, who has a 10-year-old daughter.

Olga Espinoza said the cost of the health care provided by the company is so high that she can barely afford coverage for her five children.

Workers were joined on the picket line by Rollie Katz, executive director of the Marin Association of Public Employees. 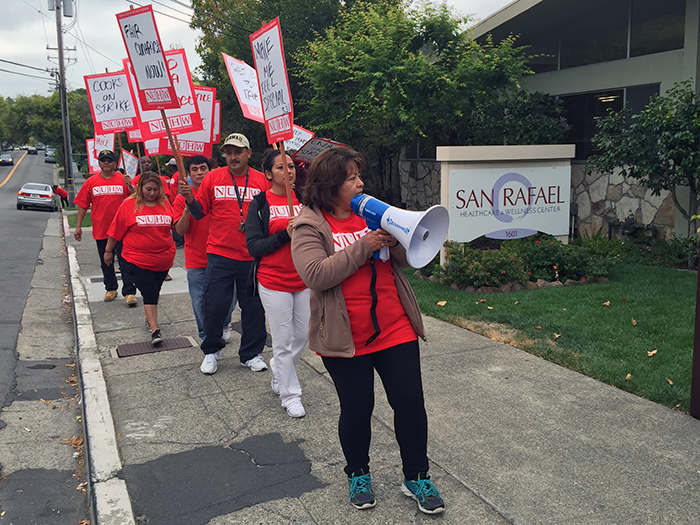 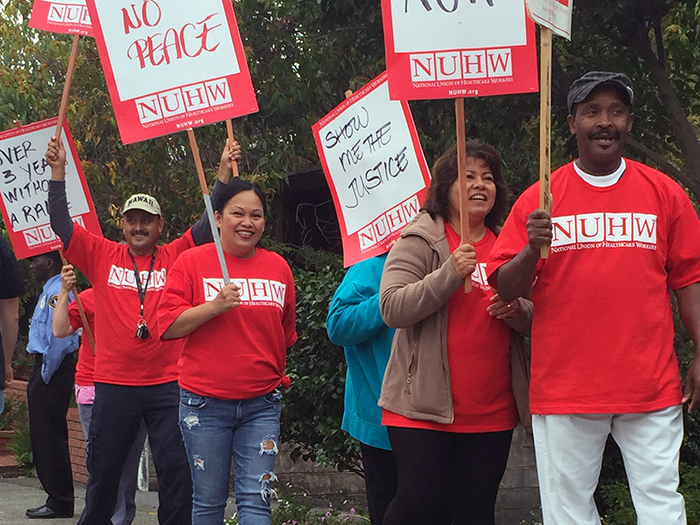 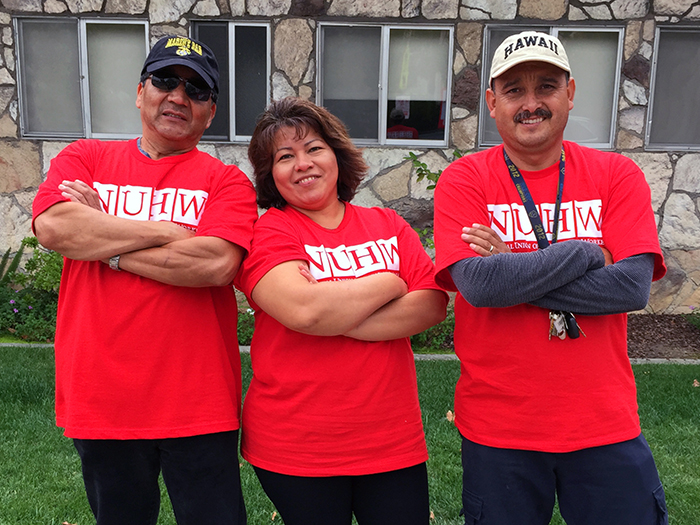 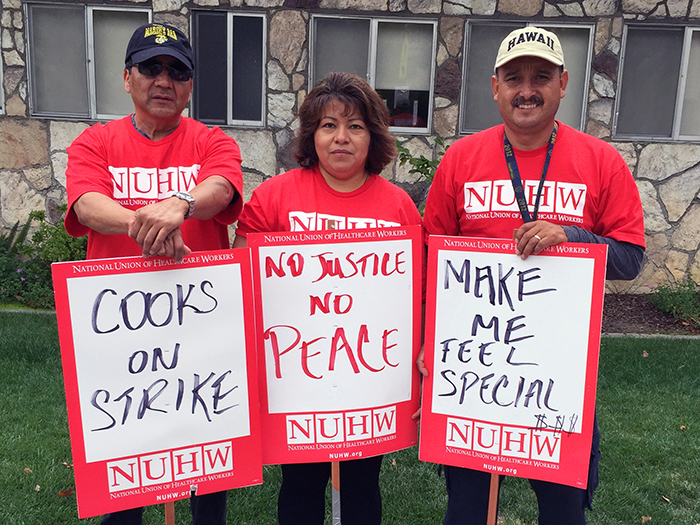 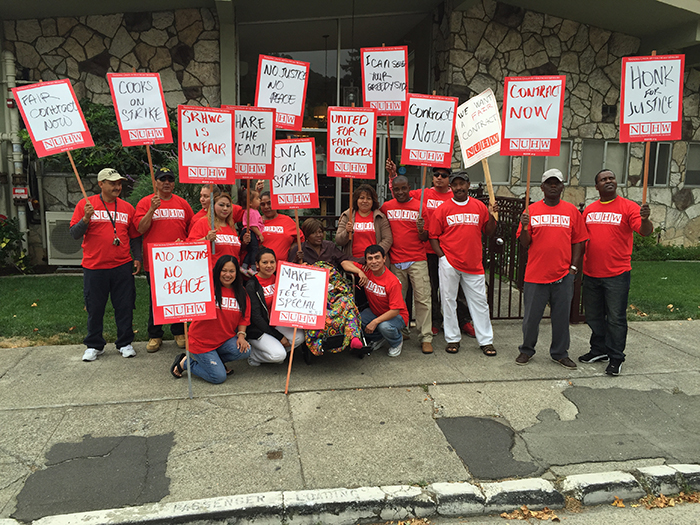 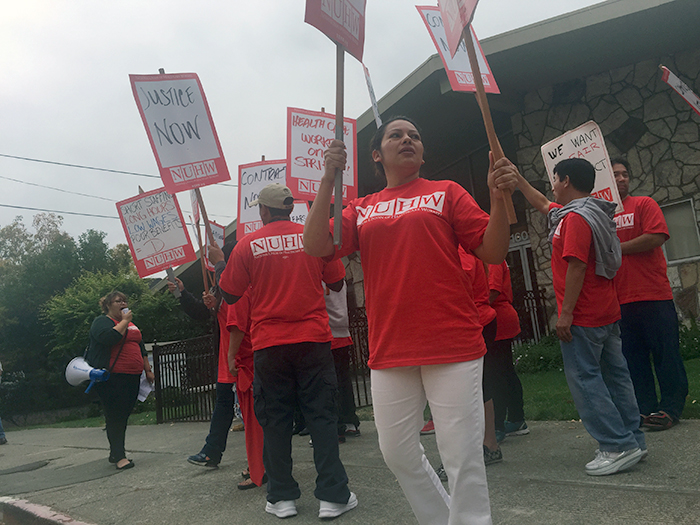 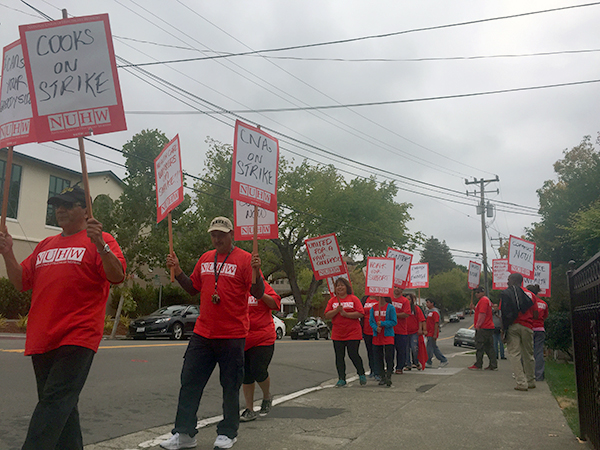 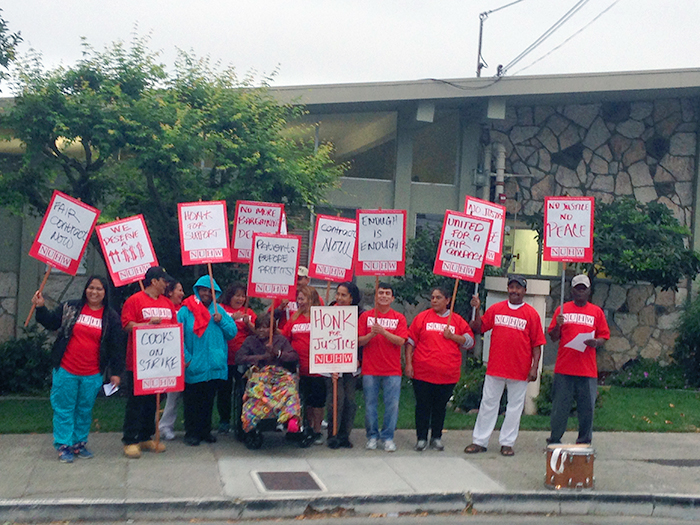