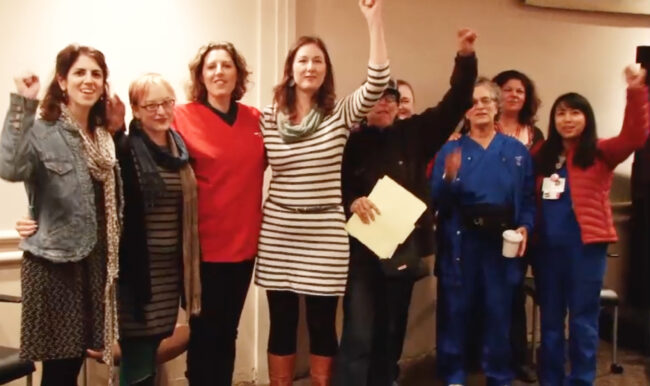 See the video below.

Sutter is proposing huge cost increases for CPMC workers’ medical coverage that would make it difficult for many workers to continue to live in San Francisco, one of the most expensive cities in the nation.

Representatives from the San Francisco Central Labor Council, the California Nurses Association, the Harvey Milk LGBT Democratic Club, Jobs With Justice, Coleman Advocates for Children and Youth, and the office of San Francisco Supervisor David Campos each made statements directly to Sutter–CPMC officials in support of a fair contract for CPMC workers and presented a letter to Sutter West Bay President Mike Cohill signed by 28 community groups.

Click here for more information on Sutter’s proposed cuts to patient care and worker healthcare coverage and to read NUHW’s op-ed in the San Francisco Examiner.