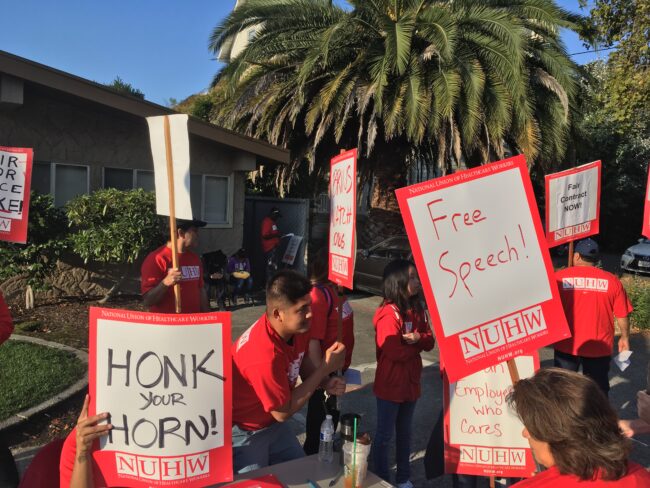 The website, which is regularly viewed by state and federal law enforcement officials, produces original reporting and archives disciplinary and legal actions against Brius, the largest nursing home operator in California.

Federal law prohibits employers from demanding the removal of a website as a condition of settling a labor contract.

The striking caregivers, represented by the National Union of Healthcare Workers, have gone nearly five years without a contract. They are predominantly immigrants; more than half of them make less than $16 per hour.

The only unresolved issue at the bargaining table concerns scheduling, but Rechnitz, in violation of federal labor law, is now demanding that the website be taken down before he finalizes a deal. That was a non-starter for workers who don’t want to leave patients and their loved ones in the dark about chronic understaffing, expired food and a lack of basic supplies inside their nursing home.

“We want raises, but we also want justice for our patients,” said Maria Martinez, a veteran nursing assistant at the San Rafael Healthcare and Wellness Center. “People need to know what is happening in these homes. We shouldn’t have to surrender our free speech rights to finally get a raise.”

Striking caregivers will picket outside the San Rafael home, which over the past two years has been cited for stocking expired food including “thickened apple juice” and supplying so few towels and wash cloths that caregivers have had to dry elderly patients with paper towels. Earlier this year, state regulators fined the facility $15,000 for failing to meet minimum staffing guidelines.

“We’re understaffed every day,” Martinez said. “Sometimes we don’t have enough soap or towels. Brius should be improving conditions for residents, not trying to hide how bad conditions have gotten.”

San Rafael is hardly the only Brius home failing its elderly residents. The California Department of Public Health last year refused to let the company permanently take control of five nursing homes citing its 386 serious patient care violations over the previous three years. State legislators in June ordered an audit of Brius’ financial dealings with dozens of other companies controlled by Rechnitz. The audit request followed reporting on the subject by Brius Watch.

This is not the first time Brius has attempted to illegally strip its employees of their rights. Federal judges recently ordered two Brius homes to rescind policies requiring workers to give up their right to join class action lawsuits against Brius as a condition of employment. Another judge recently ordered the Brius home in Novato to reinstate with back pay four union leaders fired two days before a union election.

“Brius is not a good operator, and it should not be operating under the cloak of darkness,” NUHW President Sal Rosselli said. “If Brius became a model provider for nursing home residents and caregivers, I don’t think anyone would have an issue with taking down the website.”

The union filed unfair labor charges with the National Labor Relations Board earlier this month following Brius’ illegal demand to take down the website.

Strike activities are scheduled from 7 a.m. to 1 p.m. Tuesday, Aug. 22 outside the San Rafael Healthcare and Wellness Center, 1601 5th Ave. San Rafael. A rally outside the nursing home is scheduled for noon.

Workers also represented by NUHW will hold an informational picket from 1:30 to 4:30 p.m. outside the Brius’ Novato Healthcare Center at 1565 Hill Road in Novato.

The National Union of Healthcare Workers represents more than 13,000 caregivers in California including workers at the Brius-operated San Rafael Healthcare and Wellness Center and Novato Healthcare Center in Marin County.