Around the union: News and views from throughout NUHW

Red Day at Hazel Hawkins
Members at Hazel Hawkins Memorial Hospital in Hollister showed their colors Friday, October 2, wearing red and sporting NUHW buttons, lanyards, and stickers (photo above). It was an effort to show the hospital administration that members are united in the contract bargaining fight.

Children’s Hospital of Oakland votes NUHW — again
For the third time in five years, Children’s Hospital workers voted for NUHW over SEIU. SEIU is of course challenging the results of the September 21 election but we fully expect that NUHW will be certified as the winner of the election. 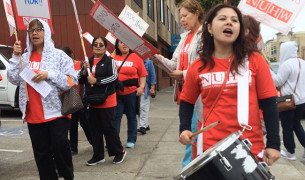 Board rules in favor of workers at San Francisco Nursing Center
The National Labor Relations Board sided with NUHW in a dispute with Providence Group, the new owner of San Francisco Nursing Center. NUHW filed an unfair labor practice charge over Providence’s unilateral decision to eliminate SFNC workers’ Kaiser health plan and replace it with an inferior, more expensive plan. More bargaining is scheduled this month.

Bargaining also continues in three of our Kaiser units: Healthcare Professionals, Psych-Social, and IBHS, where members are nearly finished voting on whether to authorize an open-ended strike.