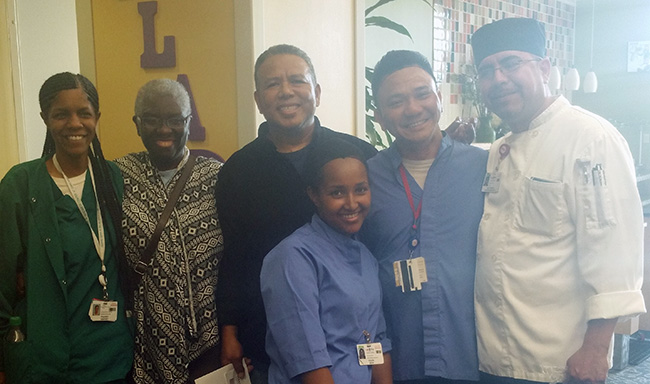 Corizon
NUHW members are having great success in pushing Alameda County to open up a competitive bidding process for healthcare services at the county’s jails. Corizon Health, a notorious for-profit prison healthcare provider, has won several renewals of its contract with the county with no competition and little oversight. Following two inmate deaths — one that led to the largest civil rights wrongful death settlement in state history, the other having recently led to the filing of another lawsuit against Corizon and the county — and the abrupt dismissal of sixty-seven licensed vocational nurses without any replacement caregivers coming on board, NUHW members at the two jails have pressured the county’s sheriff and Board of Supervisors to solicit bids from competing providers. Members are also pressuring the county to include staffing standards in the contract to prevent corporations like Corizon from endangering patients in the pursuit of profits.

Kaiser Optical
NUHW’s Kaiser Optical members are awaiting a judge’s decision following a hearing where the National Labor Relations Board presented overwhelming evidence that Kaiser violated the law by refusing to honor a contract that workers accepted in March 2015.

NUHW received internal Kaiser e-mails that were exhibits in the trial. February 2015 e-mails show that Kaiser did not take retro off the table was because they were having an internal debate whether this would constitute regressive bargaining. E-mails from March 2015 show evidence of Kaiser’s complicity with SEIU-UHW and that Kaiser knew the proposal they offered and that Optical workers accepted included retro pay, and that The Permanente Medical Group expected Kaiser Foundation Health to pay for the “mistake” of leaving retro in their proposal. In short, these e-mails made our case and exposed the lies Kaiser witnesses made, under oath, at the trial. You can read the emails, as well as the NLRB attorney’s legal brief in support of our case, at NUHW.org/opticaldocs.

• San Francisco Nursing Center, where workers recently succeeded in winning back the Kaiser healthcare plan that the employer had unilaterally cut.

• Salinas Valley Medical Center, where members rejected the employer’s offer by ninety-seven percent and authorized their bargaining committee to call a strike if and when necessary.

Bargaining is just getting underway for NUHW members at a number of facilities:

• Members at four North American nursing homes in the Sacramento filled out bargaining surveys, elected their committee, and started negotiations in April.

• Now that members at Brius-owned Novato Healthcare Center have filled out surveys and elected a committee, bargaining will soon begin there and will resume at another Brius facility, San Rafael Healthcare and Wellness Center, where a two-day strike last year lit the fire that convinced Novato caregivers that it was time to form a union.

• Members at Seton Medical Center in Daly City and Seton Coastside in Moss Beach finally had their union election certified after nearly two years of delays, and have been filling out bargaining surveys and electing a committee. They will be negotiating with a new employer following Daughters of Charity’s sale of the two facilities to BlueMountain Capital Management.