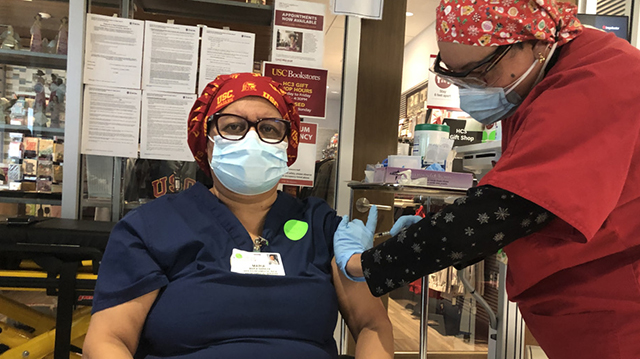 California is in the midst of a mounting COVID-19 crisis at the same time that NUHW members and healthcare workers across the country are finally getting vaccinated.

With ICU beds full throughout much of Southern California and the Central Valley, NUHW has joined with other unions, including United Teachers Los Angeles and UNITE-HERE Local 11, on a campaign to enact a far stronger four-week lockdown in Los Angeles next month combined with financial aid to help those financially impacted.

“Healthcare workers throughout Los Angeles are reaching their breaking point,” NUHW President Sal Rosselli told ABC7. “They are understaffed, overworked, and inundated with patients fighting for their lives. COVID-19 cannot be allowed to spread following the December holidays the way it spread after Thanksgiving. We all have to work together to keep this from getting worse, and that starts with people having the financial security to stay home.”

NUHW members have also gone public letting people know just how dire the situations are at their hospitals.

Michael Rivera, a respiratory therapist at Providence Cedars-Sinai Tarzana Medical Center, told KCAL9/CBS2, ABC7 and the Los Angeles Times that his hospital’s ICU was at full capacity and that the situation caregivers are facing “dwarfs” what he experienced during the Rodney King protests.

“We know the impact it has on people’s lives and businesses,” he said. “It is nothing compared to the suffering that these patients are going through. This is torture on a scale that I can’t get my head around.”

Arlene Brion, a respiratory therapist at Fountain Valley Regional Hospital in Orange County, told the Associated Press that she is now assigned six or seven patients rather than the usual one to three. “It’s pretty much all Covid,” she said. “There’s probably two areas that are clean but we’re all thinking eventually it’s all going to be Covid.”

“This is probably the worst that I’ve seen with this virus,” Brion added. “It’s hard to see because we know all these patients are eventually not going to do well.”

As NUHW members confront the surge, they are also stepping up to be vaccinated.

Maria Saravia, an EVS worker at Keck of Hospital of USC who changes in and out of protective gear 24 times a day, told the Los Angeles Times why she jumped at the chance to get vaccinated.

In March, the 8-West COVID floor became her domain. She watched as the rooms filled. Most of the ailing people, like her, were Latino. Some recovered and left. “Others I’ve seen die,” she said.

The 56-year-old had been waiting for this moment since learning of the vaccine’s approval. The virus took her best friend in May and filled her with fear each time she returned to the Boyle Heights home she shares with two daughters and her parents, both in their 80s.

But when she talked to co-workers about getting vaccinated, some told her it would give her the virus, that she could get sick and die. She knew she needed to get it to “show my co-workers it’s important.” And to prove them wrong.

“I decided to do it for my family,” said Saravia, who began her career cleaning houses after emigrating from El Salvador in 1979. “For everyone’s.”