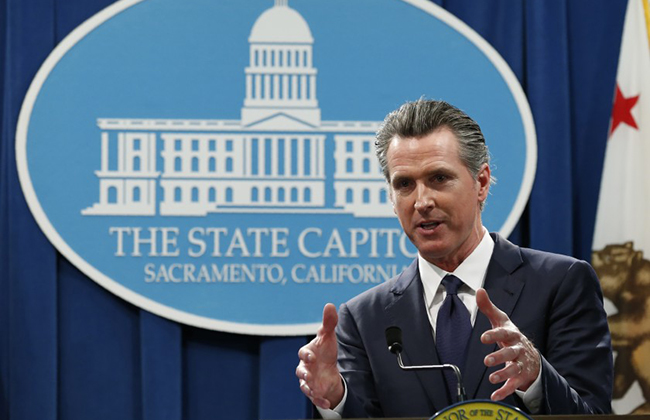 After NUHW protest, Newsom pledges to make enforcement agency “do its damn job”

Our fight for mental health parity is resonating in the state capital.

Following a statewide strike by Kaiser mental health therapists last month, culminating in protests held outside the Sacramento offices of the California Department of Managed Health Care (DMHC), Gov. Newsom earlier this month that the agency is “getting in the business of real enforcement.”

In his annual budget address, the governor said:

I want to prepare folks for some high-profile fines, They will do their job. I don’t need legislation to do that… They just need to do their damn job, and they need to go aggressively on parity.

I’ve been talking about this for too many years. And I am saying this looking into one of these damn cameras because there are folks out there not doing the right thing.  And they will be fined. And they will be held accountable. And I will deeply highlight their lack of accountability in this space.

Newsom’s remarks were covered by the Sacramento Bee.

“This is a historic moment for achieving real parity for mental health care in California and could possibly set an example for the country,” NUHW President Sal Rosselli told the Bee. “We have been doing the heavy lifting holding Kaiser accountable. Now, the governor — in the strongest possible terms — is on record announcing that he will force state regulators to be on the side of patients and clinicians, instead of the side of providers such as Kaiser.”

Ken Rogers, a psychologist based in Sacramento told the paper, “For the first time, I’m truly optimistic that California is serious about achieving real parity for mental health care. There are patients at my clinic who must wait months to see their therapist. That’s not good therapy, and it’s time that Kaiser — and all providers — are finally held accountable.”

Newsom gave clinicians even greater reason for optimism on Jan. 29, when he told reporters, “We’re committed to radically re-imagining our behavioral health system… It has been decades and decades in the making.”

The two psychological associations will discuss the findings of their assessment of Kaiser’s care practices and whether they comply with professionally recognized standards of practice and state and federal laws. Last June, the organizations began their evaluation at the request of 48 Kaiser psychologists who submitted a joint letter and evidence detailing how Kaiser’s lengthy wait times for return appointments violate professional practice standards, and put patients at risk. We will update everyone about that report and the DMHC meeting in next month’s Pulse.