Following a one-day strike in early February and just days before a three-day strike was set to begin, the University of Southern California conceded on all the major issues raised by 800 NUHW members at USC’s Keck Hospital.

After a prolonged contract campaign, NUHW members won parity with other USC workers in terms of retirement benefits and tuition assistance; USC-paid health insurance for workers and their families; guaranteed annual wage increases that take into account their experience and years of service at USC’s Keck Hospital; and most important, a voice in the hospital’s staffing and safety policies through a Patient Care Committee. The campaign’s issues were outlined in this three-minute video:

“Eight hundred USC Keck workers forced USC to adhere to its own rhetoric by making them full members of the Trojan family, both by compensating them fairly and by granting them a voice in the hospital’s staffing and patient-care policies,” NUHW Secretary–Treasurer Sophia Mendoza told USC’s Daily Trojan newspaper.

But the battle isn’t over.

One hundred NUHW members at Keck–USC are employed by Sodexo, a subcontractor that provides food service for the hospital. USC, one of the wealthiest private universities in the nation, is hiding behind Sodexo to deny responsibility for the poverty wages and inadequate benefits given to USC–Sodexo employees.

“It is fully within USC’s power and means to see that all of its workers, even those employed by subcontractors, are paid a livable wage,” Mendoza told the Daily Trojan. “The real solution is for USC to stop exploiting these workers via Sodexo by bringing them back in-house and treating them as full members of the Trojan family, with full Trojan pay and benefits.”

For the video and an update on the USC–Sodexo campaign, click here. 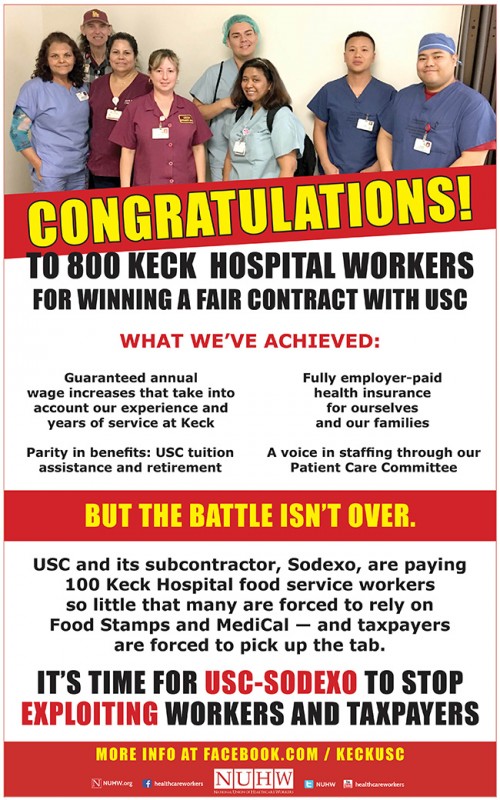