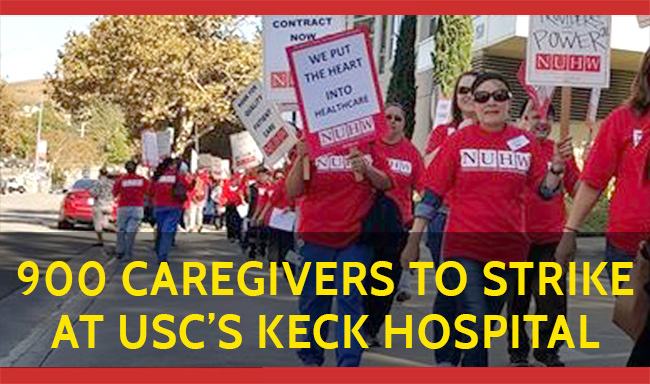 1,200 USC nurses represented by CNA will picket in support

Twelve hundred USC nurses represented by the California Nurses Association voiced their support by giving USC 10-day notice of an informational picket for the same day.

The caregivers, represented by the National Union of Healthcare Workers (NUHW), are protesting severe cost-cutting and staff-reduction measures that undermine the quality of Keck–USC’s patient care. Keck–USC has implemented cuts that leave overworked and underpaid staff rushing through jobs that require meticulous attention to detail.

“My job is vital to keeping patients safe,” said Susie Ruvalcaba, a patient care technician with 19 years on the job, “but the demands placed on me make it extremely hard for me to do it well. When they add to my workload and force me to rush from one task to another, the patients suffer for it. Keck–USC can’t claim it wants to be ‘world-class’ while it forces us to race through our work. And for what, to save a couple of dollars here and there?”

Keck Hospital is part of Keck Medicine of USC, which generates revenues of $1.2 billion a year. In 2014, USC, Los Angeles’ largest private-sector employer, reported revenues of $4.6 billion, profits of $657 million, and an endowment of $4.6 billion. Keck Medicine’s CEO Thomas Jackiewicz was paid $1.7 million in 2014, a 30 percent increase from the prior year. In 2015, Keck–USC hired Huron Group, a consulting firm tasked with cutting costs and boosting the hospital’s bottom line.

Caregivers are also protesting Keck–USC’s poverty wages and inadequate benefits. Keck–USC pays many of its healthcare workers wages so low that they qualify for food stamps and other forms of public assistance, and the unaffordable costs of Keck–USC’s health insurance plan for dietary workers forces many to rely on Medi-Cal.

“It’s unconscionable that one of the richest universities in the state forces some of its most dedicated employees to rely on public assistance,” said NUHW President Sal Rosselli. “It’s disrespectful to the workers and it’s unfair to taxpayers.”

“Administrators are giving themselves 30 percent raises and paying consultants thousands of dollars a day to tell them how to cut corners on patient care, while caregivers are getting nickel-and-dimed,” said Alex Corea, a respiratory therapist and member of the bargaining team with 15 years experience at Keck.

“We have people who are forced to choose, ‘Should I pay my child’s health insurance, or buy groceries to feed her,’” says Judy Oliva, a grill cook at Keck. “That’s a decision no parent should have to make, especially one working full-time for a major university.”

Keck–USC refuses to provide workers with the retirement plan it provides to the rest of its “Trojan Family.” USC does not offer Keck workers the five percent retirement-plan contribution it gives to all its other workers. Keck–USC’s offer of a matching contribution instead is disingenuous — Keck’s own data show that hundreds of workers do not receive matching funds because they cannot afford to make their own contribution to their 401(k). That leaves many full-time caregivers with no retirement savings at all.

Keck–USC also denies these workers, many of whom are people of color, the tuition assistance benefit it offers to the rest of its workers, which provides financial assistance to the children of USC workers who would like to attend the university.

“We are simply refusing to be treated as second-class citizens in the workplace while USC brags to the world about the ‘Trojan Family,’ ” said respiratory therapist Alex Corea.