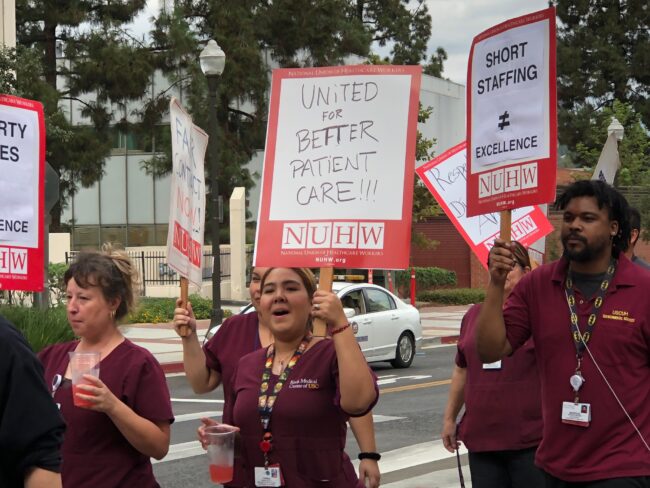 About 400 NUHW members picketed outside Keck Hospital of USC October 3, to demand not only a fair contract for themselves, but a fair deal for more than 80 cafeteria workers whose jobs have been outsourced to Sodexo, a French conglomerate that pays pennies above the minimum wage.

“You have such a prestigious university that we work for, why are we still applying for food stamps and Medi-Cal?” Laboratory Assistant Mekicia Gillette, told the student-run Annenberg Television News, which covered the picket. The picket was also covered by KCBS and Telemundo.

USC hospitals made $30 million in 2016, but the cooks and dietary workers at the university’s hospital make so little that they qualify for taxpayer-funded assistance.

Last year, facing pressure from NUHW, the university cancelled its contract with Sodexo for 50 housekeeping jobs at Keck’s Norris Comprehensive Cancer Center and made those workers direct Keck-USC employees. As a result, the NUHW-represented workers received $3 per hour raises, as well as employer-paid retirement contributions, better health coverage, and tuition assistance for their children.

But the university is refusing to do the same for the cafeteria workers at Keck USC who are still outsourced to Sodexo. In negotiations, the university, which has a $5.1 billion endowment, has held that it will “in-source” the jobs only if it can recoup the added costs from other Keck and Norris employees represented by NUHW.

“USC has no excuse not to be a good employer and a good neighbor,” said Pulmonary Technician Basil Nasir. “We see our cafeteria workers are struggling to support their families. As USC keeps growing in East Los Angeles, it should provide this community with jobs that pay a living wage.”

Caregivers, who work at Keck Hospital of USC and USC Norris Comprehensive Cancer Center, also spoke out against a management proposal that would give the hospitals free reign to temporarily assign them to units where they aren’t fully trained to work.

This proposal would eliminate the current system in which caregivers can voluntarily float to other departments where they have the appropriate training to best care for patients. Any system of mandatory floating would also leave units short-handed when caregivers are re-assigned elsewhere. Caregivers maintain that temporarily re-assigning workers would be unnecessary if management fully staffed the hospitals.

“USC’s proposal puts patients at risk by putting caregivers in units where they are unfamiliar and not fully trained,” said Radiology Technician Jessica Flores.